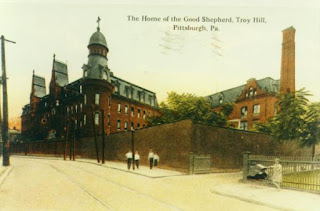 It did not look like this in my lifetime. For one thing, this photo is hand-painted. Perhaps some younger folks don't even remember or know about those days before color photography?

But, it's possible the bricks really were red back then.

Because everything in Pittsburgh turned black due to the steel mills.

The trolley tracks were still there, so this was before the 6A Troy Hill bus started up.

I'm not sure, but I think the trolley had also been 6A Troy Hill?

Or maybe it was just "6A" and they added the "Troy Hill" part after the trolley quit and there was only bus service.

I write a little about the Home of the Good shepherd, in a previous post.

My home was less than a block away from "Good Shepherd". I passed it each day on my way to school.

Joe Raimondi's greengrocer was also directly across from Good Shepherd.

We called it the "fruit store," of course. There were other Italian fruit stores down on East Ohio Street, but Raimondi's was the only one really close.

My Little Brother was Buried on St. Valentine's Day

It was a Monday.

My brother had committed suicide on Friday. At the time, I had been away from Holy Mother Church for so long, I did not even know that February 11th was the Feast of Our Lady of Lourdes.

Bobby would have delebrated his 21st birthday on September 12th of that year.

I was fourteen years old when he was born. I was in the tenth grade at Allegheny High School.

At first, I could just babysit him by putting him down on my "desk" (aka, old kitchen table relegated to one of the back bedrooms) - - -  least, on one of the rare occasions when I actually did homework or studied.

It was a few weeks until he started rolling and grabbing my stuff and catapulting himself around to roll and grab some more. Plus, kicking, and shimmying. As well as reaching, and all those activities that toddlers engage in while exploring --- and trying to control --- the universe.

Well, I was very happy to have another excuse to avoid studying.

Not that anybody cared what I did, or why. As long as I didn't bother them, or need anything, the parental units were happy to allow me to go about my business.  All the better that I should babysit Bobby. That would put both of us out of the picture.

I had skipped a grade a long time before Bobby was born. It was the second half of first grade, and the first half of second grade, that I missed. I was never happy in school at any time after that.

Otherwise I would have been in the ninth grade when Bobby was born, and not yet at Allegheny, because Allegheny started in the tenth grade. I would have still been at Latimer Junior High. There's no telling what difference it would have made in my life?

Is there ever a way to tell about that?

Now there is a convenience store called, "Uni-Mart" across from the funeral parlor. I had passed this funeral parlor each day on my way to and from school. First, Troy Hill School.

Then, Holy Name ---- Most Holy Name of Jesus --- which was diagonal from the spot where Troy Hill Elementary had been.

But, before that, there was a huge, black, imposing, Gothic structure behind high walls and iron gates. We called it The Home of the Good Shepherd. My friends told me it was a place where "bad girls" had to go. Apparently they could never come back out. We never saw any of these "bad girls," except once.

They went to the public swimming pool, with chaperones.

One of the "bad girls" had a name carved on her legs. It was a guy's name.

Otherwise, they seemed like any young folks having fun at the pool.

Only a little louder, meaner and rougher. Sort of how I would expect "bad girls" to be.

(I became a "bad girl" myself, but not until a few years later.)

I lived on Lowrie Street starting in 1956, when I was eight years old. The Good Shepherd Home was demolished in 1959. I remember eating fruit from Rimondi's, right across from the demolition. I was one of Rimondi's best customers, and had been ever since I was nine years old.

Mr. Rimondi called me inside while I was sitting on the steps of his fruit store. He gave me a bag of fruit, and said, "Now you can go back out and watch your show." 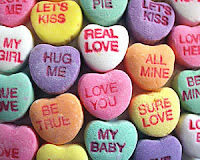 On Valentine's Day of 1983, my sons and daughters --- ages two, four, five and twelve --- were getting restless sitting in the cramped funeral parlor. They and I walked across Lowrie Street, to look for treats or snacks. I think we bought some little boxes of candy Valentine hearts.

I realized that I had just bought cigarettes for Bobby in this "Uni-Mart" a few days before.

BY EMILY DICKINSON
I felt a Funeral, in my Brain,
And Mourners to and fro
Kept treading - treading - till it seemed
That Sense was breaking through -

And when they all were seated,
A Service, like a Drum -
Kept beating - beating - till I thought
My mind was going numb -

And then I heard them lift a Box
And creak across my Soul
With those same Boots of Lead, again,
Then Space - began to toll,

As all the Heavens were a Bell,
And Being, but an Ear,
And I, and Silence, some strange Race,
Wrecked, solitary, here -


(it seems that the official "smart people" --- i.e., academics --- have declared the above poem by emily dickinson
number 340
is a metaphor for dickinson's "descent into madness."
grief itself is a descent into madness.
love archy the cockroach, but with some punctuation,
unlike the old days lol)