I am grateful for this article, on First Things.


There have been far too  many allegedly "Catholic" teachers and legislators arguing for their  non-existent "right" to publicly promote abortion, criticize the Holy Father, and vilify the teachings of the Magisterium in every way possible.

I am partly incorrect when I say their right does not exist.

Of course, being U.S. citizens, they certainly do have a legal right. But, no faithful practicing Catholic has any moral right to publicly take exception to the doctrine or dogma of Holy Mother Church.

At the very least, I think they would have to ask for Confession before receiving the


If she is threatened with being fired for what she said, then her job is on the line because she is a devoted Catholic. If she is under the gun for how she said it—and the fact that the Sensitivity Police are offended by it—then she has lots of company, and in high places too.


I used to think that we U.S. citizens were free to state our personal opinions.

Further, if a U.S. citizens happens to be Catholic, and teaching in a Catholic school, then it would be normal and reasonable for that citizen's opinion to reflect the teachings of the Magisterium.


I joined an online group for "pro-life progressives."

Of course, pro-lifers are frequently accused of being conservative Republicans. (I've never been able to figure out what is so Democratic or liberal about killing babies before they're born, but I digress.)

A few days after I joined this group, a female posted a picture of our Holy Father, Pope Francis, with a recent quote reminding Catholics to uphold the two-thousand year-old teaching of Holy Mother Church by not using artificial birth control.

Her comment on this picture and quote:  "I'm Catholic, but I totally disagree. Some people can't afford to have kids." That is, she claimed to disagree with our Holy Father, Pope Francis, on a matter of doctrine and dogma.

I reminded her that she is not actually Catholic, because Catholics are not free to disobey, or even doubt, the doctrine and dogma of Holy Mother Church. We are certainly not free to influence others to disobey?

Was it St. Thomas Aquinas who said, "Ten thousand difficulties do not make a single doubt?"

She then proclaimed that I am not "progressive" enough, and her group was for "progressives."

Well, I tried to explain that I am highly progressive, but that doesn't mean that my fellow Catholics are off the hook when it comes to admonishment for their sins. If a Buddhist, a Baptist, or a Lutheran publicly took exception to a teaching of Holy Mother Church, it would not concern me.

But, please notice the little inverted turnabout here:  Her standard for "progressivism" is higher than the Holy Father's own pronouncement of Catholic doctrine and dogma. She is free to publicly call attention to her own heresy, but I am not free to call myself "progressive" outside of her standard.

This person could have simply ignored the Holy Father's statement. She could have just kept it to herself, and struggled privately with her difficulty. It almost seemed that she felt that publicly proclaiming herself as "Catholic," would lend credence to her dissent. There's no need to even consider any religious topics, in a "progressive" group.

"Progressive" is a secular label.

A Thankless Job for Us


So, those of us who actually give a hoot, are left here in the wilderness with the thankless task of admonishing the sinner all by ourselves, which nobody else seems able or willing to do these days.

One person from a local eatery said to me, "I only go to Confession once a year unless they show me a reason to do otherwise."

{Well, how about this for a reason:  You committed a mortal sin and you cannot receive the ~~ *B*O*D*Y* of *C*H*R*I*S*T* ~~ unless you are in a state or Grace. You can only be in a state of Grace again if Confess your mortal sin first? }

I thought, but did not say.

I even asked a priest about this (in Confession, by the way, because I felt that I had sinned by not instructing her in her ignorance.) Strangely enough, Father said I had no obligation to do so.

Another person told me he had not been to Mass for twenty years, and asked if he could go to Mass with me. (Well, he didn't need ME for that, so why did he wait twenty years? Very mysterious.)

A few days before we were supposed to meet for Mass, I started worrying that he did not know or remember that he needed Confession before receiving the *B*O*D*Y* of *C*H*R*I*S*T* in the EUCHARIST.  I realized that I had an obligation to either remind him, or tell him for the first time.

(The way catechesis has been going for the past forty years . . . ? It might even be possible for a man in his fifties to not know the basics.)
I tried to leave a message on his voice mail telling him about Holy Mother Church's doctrine.
He did not show up --- thank Heavens! He claimed he could not hear the message, but I'm not sure if that was the real reason. I'm just glad he did not show up.

A young relative of mine saw a friend from school at Mass. My relative knew the friend had not been to Mass for a long time, because the friend had confided this privately. This relative wrote a little note to the friend, reminding the friend of her Sunday obligation, mortal sin and the necessity of being in a state of Grace before receiving the *B*O*D*Y* of *C*H*R*I*S*T*. She even asked Father about it, but he did not offer much guidance or support. He did mention the admonishment of sinners, and instruction of the ignorant, but he kind of shrugged it off.

Perhaps I can understand  --- a little? We don't want to start a brawl or make a scene during Mass, of course.

But, what U.S. Catholic isn't wondering why Nancy Pelosi is still pretending to be "Catholic?" Can't her bishop tell her the truth?

And, that seems to be going on everywhere these days, here in the U.S. Thank goodness for Cardinal Burke!

The Catholic Teacher's Bishop Does Not Want to Talk About It

Bishop Bootkoski makes statements that are mutually exclusive. First, he claims that his "compassionate Catholic community . . . never wavers from our traditional Catholic teachings."

Personally, when I read of a parish or a diocese being called, ". . . Catholic community. . . " I think I already know I'm reading an author who subscribes to only the "spirit" of Vatican II but not its documents.

I guess he doesn't count that traditional Catholic teaching that says that homosexual acts are intrinsically disordered? CCCC 2357.

On the other hand, I do get a little tired of people who claim that someone is committing an act in private when they have no way of knowing that. (There's only one way to know.) The Catechism also says that nobody has the right to know everything about another person. Just because a person has a same-sex attraction doesn't mean she or he is acting on it, and we have no right to bring or cause scandal, or to indulge in gossip.

Then, Bishop Bootkoski says, "Pope Francis reminds us that we are to accept all of our brethren. We must ensure that our educators steer away from harsh and judgmental statements that can alienate and divide us."

Bishop Bootkoski says this as if "acceptance" of our fellow human beings means that we should also accept their sinful lifestyle.

But the teacher's statement was neither harsh nor judgmental. It was based on logic. She stated that sexual orientation is not an unchanging, inborn physical characteristic.

Therefore, it would not make sense to consider sexual orientation under the Fourteenth Amendment.

Catholics never can accept a sinful lifestyle as the norm. The Spiritual Works of Mercy tell us that we must:

Perhaps Bishop Bootkoski --- like many "Spirit of Vatican Two" adherents from the '70's and on --- would like to work only the Corporal Works of Mercy: 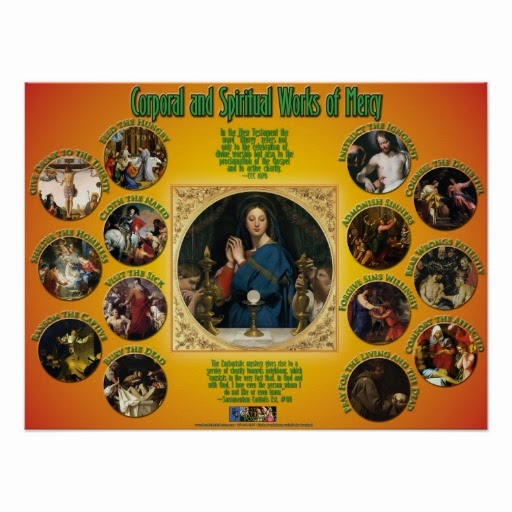